skip to main | skip to sidebar

The plot is set. Years after my father’s death his top secret research project coincidentally is being revealed; and the intrigue evolves in a familiar thriller fashion:

In our family’s summer house a hidden door has been found. After making the decision that it should be opened, it leads us down to an unknown basement where we make the discovery of a clandestine archive, full of dust and documents. The research material maps out the mysterious circumstances of the disappearance of a number of important persons. Now, unexpected facts come to our knowledge and formerly unknown connections of historical events emerge. As we study the material, including some shimmery, blurry images of old video tape recordings from the seventies, on which different, obviously nervous (and perhaps frightened) people appear, talking about strange matters, we slowly become aware of the proportions and the magnitude of our discovery, which leads us to the conclusion that—yet to hesitate—we must travel to New York. 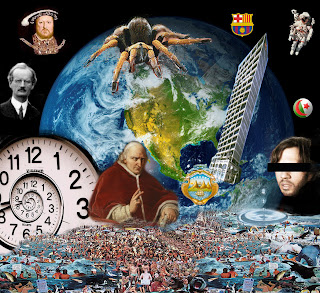 
New York. A gigantic cosmopolis, even bigger than what the latest records show (apparently not quite up to date); it has failed to seize growing throughout the years, indomitable and heedless, in spite of governmental restriction programs, continuously striving upwards in celestial vain. Within this urban dream shape we experience an overlapping city landscape with ground floors reaching higher grounds and street levels interconnecting through exquisitely engineered pipe-tunnel roads enclosed with chrome and glass, spiraling their way through the sky. We stay in a luxurious hotel, thousand stories high, surrounded by equally high buildings. Our hotel room, at first glance, has a modest design—less furniture than space, more room, less gloom—yet exclusively ultra modern futuristic; the room shifts in colour, blending perfectly: from white to beige to grey, with a slight resemblance of mosstone. The shape of the room, not easily to define, could be described as a trapezoid semi-superellips and has an entire wall section consisting of a large window glass, and thin white draperies. The room goes with an Italian balcony; un letto matrimoniale, a royal wedding bed; and an original Steinway, white and shiny. Built into the walls is an intricate system of small rippling rills of water flowing through lightly lit panels of frosty glass. A surround speaker system is part of the interior architecture as well: down from the beautiful cupola roof different sound environments and atmospherics are spreading out and filling up the entire room, mood by listener’s choice: Scottish highland, German forest, African savanna, Mediterranean coast, Catalan monastery, Swedish midsummer, misty moor with dancing fairies, deep ocean life on Mars … We fill our glasses with champagne and drink a toast to the bride and groom. The wedding cake is made of love, hope, cream and strawberries.

Out in to the Jungle. Since we are newly married and hypersensitive, we are overwhelmed with the enormous traffic intensity; but what strikes us even more is the fact that the air is clean and that we can joyfully breathe. We fill our lungs and blank our minds—from that moment on our mission is forgotten. At first relieved, but then suddenly troubled again, it seems that what now is at stake is our marriage. However, that is a worry we chose to ignore. Futuristic figures of all sorts pass by, among ordinary 21th century people, as we stand there on the sidewalk, in sunshine and gazing amazement. The street, so it appears, is a reconstruction of S:t Eriksgatan in Stockholm. Not knowing what the next step should be, we decide not to make up any plans but to submit to the spur of the moment, and so it happens: we found ourselves involved in the rather dodgy act of following a queer-looking gentleman wearing white clown makeup, a red and yellow-striped sweater and purple trousers with blue suspenders, who is riding a 16 feet high unicycle northwards … in the direction of Brooklyn! Soon we are confused; the lack of bridges and water is what puzzles us, while the biking clown disappears around the corner of a fashionable and impressive brick stone building. As we compare reality with our own map, we come to the conclusion that we are no longer on an island in the Hudson river, called Manhattan as we presumed, but that this future version of New York city actually consists of a conglomerate of islands, a pseudo-continent, like a reversed minor Pangea. As a matter of fact, large parts of the North American east coast has been torn off from the mainland, melting together with other parts and nearby islands and then been drifting away, out to the sea. All of a sudden I remember the first line that I learned in Icelandic: “Ísland er eyja í Atlantshafi”—“Iceland is an island in the Atlantic”.

At this point there is a shift of perspective: high from above, while the sun is setting, we look down on our dream named New York, where it lies like a tiny dark spot in the grand shiny ocean. One long, single railway bridge leads out over the water, away from the black island/continent. 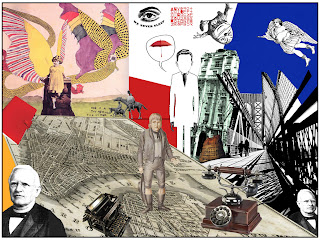 Paul in Paris (syrup and carbuncles), 1978
Posted by Kormorantrådet at 8:36 AM

Here´s a dream report posted earlier about the connection between Iceland and a city in the USA (San Francisco):